Dozens of people were detained on Tuesday morning after Anaheim police raided an illegal gambling operation in a vacant storefront, authorities said.

Officers served a search warrant on an out-of-business hydroponics business at 1676 W. Lincoln Ave., according to Anaheim police.

About 70 people who were inside the building were detained and questioned, Sgt. Shane Carringer said. Inside there were video gambling devices and large electronic table machines, Carringer said. Of those detained, 25 were issued citations and were released on site. The citations ranged anywhere from drug possession to being at the location of an illegal gambling operation.

Thirteen more were booked into the Anaheim jail for more serious crimes such as operating the gambling enterprise or having other outstanding warrants, Carringer said.

“These (gambling operations) are dens of criminal activity,” Carringer said, adding that the illegal activity had been active for a few months.

Police recovered at least three guns from the site, which is next door to a smoke and vape shop. Drugs and drug paraphernalia were also found at the site, police said. Authorities were also going to seize money and the gambling machines, Carringer said.

No injuries were reported. 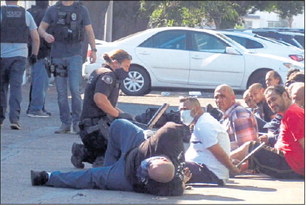 Anaheim police detained about 70people after a raid on a suspected illegal gambling operation on W. Lincoln Ave. in Anaheim Tuesday.

Click here to see this page in the eEdition: